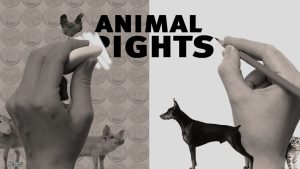 Six months after firefighters rescued piglets from a barn fire they ended up eating them as sausages. The farmer whose barn had caught fire sent the sausages to say thank you and told the Guardian, “This is just what we do – we are not an animal sanctuary. We give the pigs the best opportunity and the best life they could have for six months.”

If she needed to defend her thank you gift or not is perhaps of less interest than her own and the firefighter’s reversal regarding the value of the piglet’s lives, or animal rights. Empathy for the rights of animals is often misconstrued as humanising them. It humanises us to examine what suspends our instinct to value any life in one situation as opposed to another.

Comparable questions about rights and liberty were asked about Fugitive Slave Laws in the United States when slavery was legal in some states while outlawed in others. These laws meant that if a slave escaped to a free state, that state was obliged by law and in contradiction to its own sovereignty, to betray the slave in favour of respecting the so-called slave master’s right to recapture them. People who escaped slavery “shall be delivered up”, because “retrieving slaves was a form of retrieving private property.” In other words, if a slave reached the freedom of a state that had outlawed slavery, the right to ‘property’ overruled it.

Regarding animals as property provides a context for the farmer’s gift. They belonged to her and so the relationship involved the commodification of them. When seen through a prism of property, the firefighters never saved her pigs, they saved her investment, albeit in a moving, loveable, squealing form at the time of the fire, and so the piglet’s lives came to hold emotional value in one, noncommercial, instance but not another. If Australia had a commercial market for dog meat in the way that it does for pig meat, dogs wouldn’t have the protections against cruelty that they do.

Some of the people living in free states, who witnessed the re-captures of fugitive slaves asked themselves, “How shall we stifle these feelings of humanity?” without knowing what to do when the same woman could have liberty granted on one side of a border, and not the other. Slavery was part of the economy, some would say it’s foundation, sanctioned by slave states and supported by free states during that transitional period, so it fell on all citizens to join in normalising it, or feel morally conflicted and cope.

In a decision to personally confront ethics about her meat consumption, writer Louise Gray visited an abattoir and faced a similar question. She describes her distress and feelings “I have to leave the room. My hands are shaking and I have to concentrate to move my legs”, then concludes “I no longer feel we should all visit a slaughterhouse. We should be protected from it, retain our innocence. We are too weak, we have to disconnect – to protect ourselves.”

It took courage to bear witness to where her meat came from, but by saying it is her feelings that need protecting raises questions. The firefighters saved the piglets trapped in a fire, but no longer witnessed the piglets when it came to what their owner did. The worst thing Louise Gray said she did, “was to meet the pigs beforehand”. Aldous Huxley counsels “Facts do not cease to exist because they are ignored”. She bravely tried to face it, and facts remain.

One of the forces for emancipation was increasing numbers of people escaping slavery to free states. As they escaped, a society and people that had been previously disconnected to their plight, actively supported and helped them to flee as far north as Canada. They mobilised with incredible efficiency and with an ‘underground railroad’ to provide safe passage. In one case a so-called master was found to be on the same train as the man escaping from him. The conductor stopped the train so the escapee could run into the woods and away to safety. He asked the master once the train was in motion, if “that wasn’t your slave?” and then quietly refused the master’s offer of a hundred dollars to “Stop, stop the train!” The master then went to the engineer and offered him a large amount of money to stop the train, but “on went the cars with increasing speed”.

The farmer who succeeded in getting her pigs back was honest and within her rights about not being an animal sanctuary.

For the piglets, with every right to safety, reaching an animal sanctuary would have been like reaching Canada.

Sorry, the comment form is closed at this time.